The Commonwealth Bank (CBA) has taken a beating overnight on social media platforms Twitter and Facebook. What started as a ‘minor upgrade’ to NetBank ended in a social media and literal spat for cash. By 3am the issue had not been resolved, with CBA customers at the end of their tether.

Read the posts on Storify.

It all started with a small Facebook post on the CBA page on Sunday 27, 2013. It was not dissimilar to the outage notice of the night before (1am – 7am), about a minor upgrades, except this notice was of an earlier start to a 6 hour upgrade may impact some accounts from 6pm-12midnight on Sunday evening:

“We’re upgrading NetBank tonight, making several minor enhancements to Australia’s #1 online bank. NetBank, mobile, tablet and CommBank Kaching apps will be online, however some accounts and features will be unavailable 6pm-12midnight (AEDT) on Sunday 27 October. You can stay up-to-date commbank.com.au/update“ 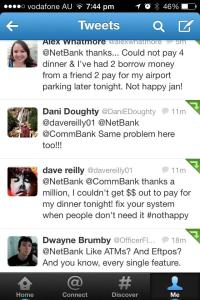 The post from the Saturday outage from 1am caused no ripples, with 56 people liking that update and about 25 comments. Sunday’s post, however, turned into something of a social media storm with 85 likes and nearly 500 Facebook comments on the post and over 100 comments directly on the Commonwealth Bank’s Facebook Page. The @NetBank Twitter account also did a short innocuous tweet about the same time, then seemed to go to sleep for two hours before it responded to the tweets for updates, cash and help. Initially mild queries and complaints came in of inconvenience came in:

Then some more desperation started to appear in the posts, like from Angela on Facebook over a 2 hour period:

After several hours, the impact of the “minor up-grade” became more apparent, with CBA customers almost crying out for help:

And so the list of individual dramas, tension and frustration continued. Several CBA employees jumped in to defend the corporate giant and leading to with a tongue in cheek poke at impatient customers, led to them being identified as employees and images of their full name, work role and other details being taken as screen shots and posted online. CommBank posted a warning directed at several individuals, deleted several customer posts that identified an employee and reminded the customers of the Facebook Community Guidelines.

At 2:15 am CBA updated their web page with “We’ve had an unexpected issue that we’re working hard to resolve. We still have more investigation and testing to do before we bring our systems back up.”

At 2:30am the CBA posted on Facebook “Hi everyone, we apologies that NetBank still isn’t available right now. We’ve had an unexpected issue that we’re working hard to resolve. We still have more investigation and testing to do before we bring our systems back up. This is all the information we have at present, our next update will be later this morning. Again, we apologise for the inconvenience and thank you for your patience.”

And that brings us to 3am when this writer will cease monitoring the situation. I became involved while trying to phone the CBA tonight to advise of overseas transactions on my account, only to eventually get the message “we have encountered a technical problem” and the call was terminated by the CBA.